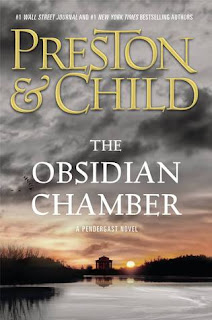 The Obsidian Chamber by Douglas Preston
My rating: 4 of 5 stars

After a harrowing, otherworldly confrontation on the shores of Exmouth, Massachussetts, Special Agent A.X.L. Pendergast is missing, presumed dead.


Sick with grief, Pendergast's ward, Constance, retreats to her chambers beneath the family mansion at 891 Riverside Drive--only to be taken captive by a shadowy figure from the past.

BUT IN A WORLD OF BLACK AND WHITE, NOTHING IS AS IT SEEMS

And by the time Proctor discovers the truth, a terrifying engine has stirred-and it may already be too late.

I read the first Pendergast book Relic a couple of years ago and since then I have this been a favorite series of mine. It has been an interesting journey where I have learned more about Aloysius Pendergast and his family as the books progress and now here we are at book 16.

Pendergast is missing after the harrowing ending in the last book, and no one knows if he is alive or dead. For Constance, his ward is this a traumatizing experience and she has decided to retreat to the world she is so familiar with, the chambers below the Pendergast mansion. However, and an old enemy has returned, someone that she knows very well. But, Constance will soon learn that not everything is as it seems.

As with most books in this series was The Obsidian Chamber a pure joy to read. I miss the time when I had several Pendergast books to read, but in a way is it also nice to get a new one every year. This book felt more like a Constance book than an Aloysius Pendergast book. Of course, he is not totally missing from the book, but much of the story is about Constance. It's actually a bit tricky to write this review without spoiling too much of the story, like for instance who is back. So, I will just write some general thoughts about the book.

Constance is an intersecting character, not my personal favorite, but her backstory is truly intriguing and her first introduction to the series was spectacular. I do find myself not overfond with her growing attraction to Aloysius. I just can't seem to enjoy that idea. I must prefer her just being his ward. She has a central role in this book, and I did enjoy her part in this book. I was a bit surprised by her action in this book, how docile she seemed. However, everything got explained nicely towards the end of the book.

I was a bit worried that it would end with a cliffhanger, and yes, there was a kind of cliffhanger, but still, the story felt ended at the moment. It's the kind of ending that felt satisfying and not frustrating. The previous books end was way more frustrating than this.

Finally, I hope that Corrie is in the next book. She has not had a prominent role since White Fire book 13 and I loved that book and I adore her.

I want to thank Grand Central Publishing for providing me with a free copy through NetGalley for an honest review!